On set with Philip Hurn

Cinematographer for "TRADE OF INNOCENTS" 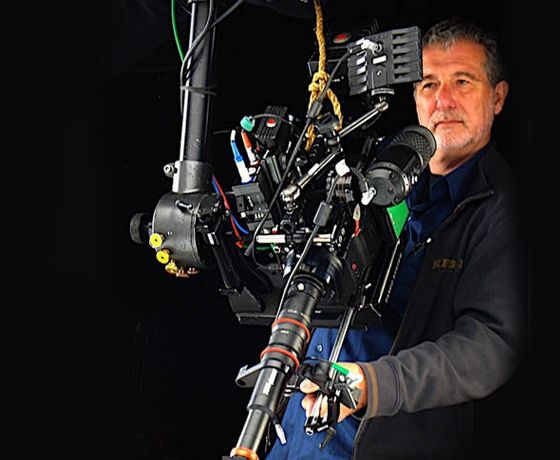 I have been a loyal fan of OConnor heads since my early documentary days when I bought my first OConnor 50 in 1982 to support my Aaton LTR 54 Super 16mm camera.

TRADE OF INNOCENTS is an independent feature film from writer/director Christopher Bessette. It is produced by Bill and Laurie Bolthouse (who are champions for health care and justice all over the world), along with Jim Schmidt and Dave Ross. This foray into filmmaking is the team’s way of shining a light on the issue of child sex trafficking. Set to release early 2012, the film stars Dermot Mulroney and Mira Sorvino. TRADE OF INNOCENTS takes the audience into the back streets of a tourist town in present-day Southeast Asia, where a little girl waits for the next man to use her. Alex (Mulroney), a human trafficking investigator, plays the role of her next customer as he negotiates with the pimp for the use of the child. His wife, Claire (Sorvino), is caught up in her role as a volunteer in an aftercare shelter for rescued girls. As the story plays out, the two struggle with their grief of losing a child years earlier. They find themselves being pulled together and into the lives of local neighborhood girls, whose freedom and dignity are threatened – by the environment and the dangerous human trafficking world.

Hurn goes behind the production

“I was working on a film in Upstate New York and the A.D., Stewart Young, had invited director Christopher Bessette to come down from Toronto for a set visit. Christopher and I hit it off and three years later I got a call telling me about TRADE OF INNOCENTS.

Christopher had traveled to Cambodia and had witnessed events that became part of the story. The goal was to set these dark events against the stunning beauty of South East Asia.

Christopher told me that “The one thing for the audience to keep in mind is that more than a movie, this is really happening and is going on right now somewhere in the world.” It’s our hope that this picture might motivate action to help stop this evil. We are both passionate that this story be told.

We decided to shoot on location in Thailand (as Cambodia). The art department, lead by production designer Mona Nahm, had this enormous task of building a realistic replica of one of the temples of Angkor Wat in Sien Reap, Cambodia. We nicknamed it “Foam Core Wat”, because it was primarily built out of bamboo framing and carved foam and took one month to build for one day of shooting! It pained me to see a detail that must have taken hours to carve, just out of frame, but the story and action had to come first.

Most of our shooting took place in and around Bangkok and our goal was to find locations that would pass for the small city of Sien Reap, Cambodia. We did a lot of shooting in the French Quarter and China Town that had early French colonial influences. One location in particular was the old bicycle shop. This involves  the little girl who has befriended the couple (Sorvino and Mulroney) who live upstairs from her. The building was at least 150 years old and when we shot upstairs we were limited to about 20 cast and crew together for fear the floor might collapse!

We developed a color palette for the film where red and yellow depicted innocence and green depicted evil. The colors of the walls in that building were already yellow and made to order! In general, though, the color schemes that exist in Thailand are completely different than in Cambodia, so not only did the art department have to remove all the Thai signage wherever we shot but many locations were painted to reflect the natural paints used in Cambodia.

A theme that Christopher and I thought most important was to create lighting and camera movement that would slowly reveal this human tragedy, peeling back the veils of secrecy. We tried as much as possible to include foreground elements, not only to provide for more depth but to highlight the idea that terrible things are going on beyond the Veil, in the back rooms of what appear to be normal shops and markets.

Working with the local crews

We had a tight 36 days but thanks to my crew we ended up shooting under budget and finished in 33 days. The local crew was amazing. They were dedicated and very hard working.

Thailand actually has a really good film infrastructure. There are at least three large lighting/grip and camera houses. They tend to work like the old Hollywood system where crews pretty much work their way up within one company. They work “English Style” where the “Sparks” do flags and the grips work on camera, cranes and dollies. My A-camera operator, Richie Moore, is an American who lived in Thailand for 15 years. He had just come off of “Hang Over II”. He was not only a great camera operator, he speaks fluent Thai and was also my translator. And, my Steadicam operator as well as B-camera operator, one of the best in the world, Somsak Srisawat, is famous for his work on the “Ombak” period films.

Getting ready for this project was interesting. I got some great advice from James Chressanthis ASC, re crews and how they liked to work in Thailand. He told me that he who yells loses respect. Being a low key kind of guy, anyway, I found myself endeared by the crew and got the nickname of “Pa Pa”, for Honored Uncle. I must say I loved working in Thailand mostly because of the crew and cannot wait to return on another project.

When I got to Thailand, one of the first things that I learned that set the tone for my production package is that OConnor not only has a strong presence in Thailand, but was the camera support of choice. What I found amazing is that just about every piece of equipment seemed brand new. This film just wouldn’t have been possible to shoot with the two large Optimo Zooms without the OConnor 2575 heads. Both Richie and Somsak requested them – but they were already on the list.

We had a huge chase sequence that we had to shoot in one night in China Town that really should have been two nights. The logistics of lighting over several ally ways and closing down a major street could only happen once. We had an added complication that we were also shooting in the Red Light District. So when asked by locals what we were working on, we said “an action movie”. With the use of two 80-foot Condors I was able to hopscotch their placement so while we were shooting on one street the other Condor was on its way to the next location.

Somsak had this wonderful rickshaw that he built. With two guys pulling it, running flat out we were able to achieve leading shots in the narrowest of alleyways—and I mean narrow!

The pace of shooting was fast and we really could not afford bad takes due to equipment failure. The OConnor heads worked flawlessly and enabled us to make that one night of shooting as well as every day on our schedule! The continuously variable counterbalance enabled us to balance those large zooms perfectly, allowing Richie and Somsak to create cinematic magic. I love the fact that the head can point the camera straight down. This allowed us to achieve extreme down angle shots while keeping the camera perfectly balanced.

I have been a loyal fan of OConnor heads since my early documentary days when I bought my first OConnor 50 in 1982 to support my Aaton LTR 54 Super 16mm camera. The 2575 made many of the challenging and often impossible shots on TRADE OF INNOCENTS not only possible, but magical.”

Philip Hurn, has been Director of Photography on over 100 projects including feature films, commercials and documentaries, brings to each project his energy, his speed and a collaborative spirit. Hurn’s depth of experience and his innovation in creating cinematic styles makes him the choice for both producers and directors. He has won three Emmy awards, a Cine Eagle and Bronze Hugo award (Chicago international Film Festival) and an honorary mention at the Melbourne International Film Festival. He is an owner of, and has extensive experience with, the RED camera system. Based in Los Angeles, Hurn also holds a European Union passport and is available for work worldwide.