On set with Amin Oussar

Director of Photography for "PAWO" 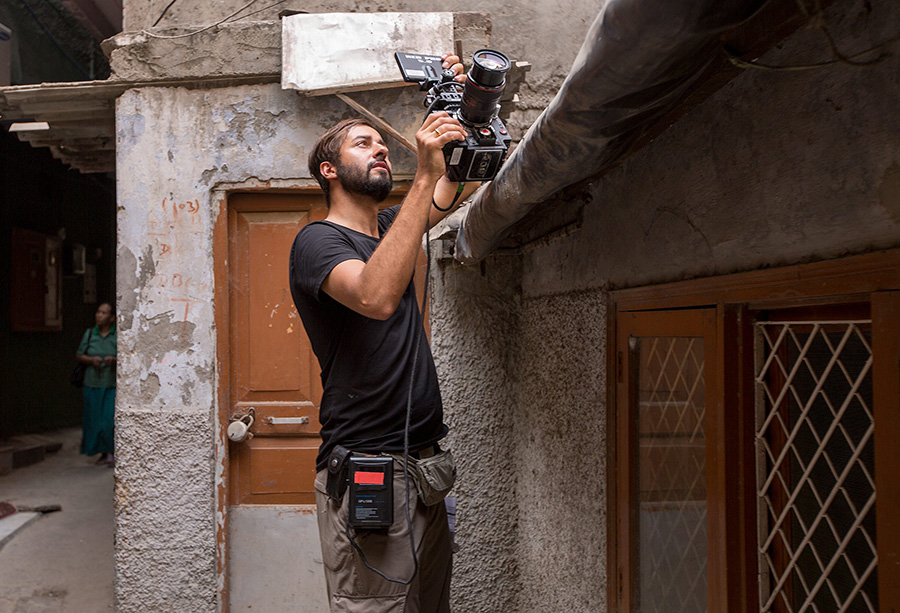 Filming in Delhi and northern India, we used a large lens on the camera to capture the big shots and the camera was supported by very a sturdy OConnor tripod.

Director of photography, Amin Oussar began work on his latest project, a feature film based on the true story of a Tibetan protester who died after setting himself on fire in India in 2012 during a demonstration against a visit by the Chinese president.
The powerful tale tells the story of Dorjee a young Tibetan man who flies to India where he is torn between love or protesting for Tibetan freedom. The film is based on the true story of Jampha Yeshi, the man who made global headlines when he sprinted fifty metres outside the Indian Parliament building in New Delhi, engulfed in flames. The 27-year-old had been protesting against China’s continued rule over Tibet and collapsed in flames as other protesters tried to save him.

Oussar started shooting the feature, entitled PAWO, at the beginning of October 2014 filming on location in the north of India, Delhi and parts of the Himalayan mountains. The schedule for the whole shoot was very tight, so Oussar chose to shoot 6K using the RED EPIC DRAGON and a range of camera support equipment, including OConnor.

Oussar said: “This is the first time I have shot in 6K but as we only had thirty shooting days in total it was crucial to capture the highest resolution we could, so any problems could be fixed later in post. Although it’s a feature film, we’re having to shoot parts of it like a documentary. There have been no problems so far, it has been very well shot and the pictures we have captured are extremely clear.”

OConnor offers support in the most challenging environment

The thirty-day shoot spanned several regions of the Asian continent, and in addition to the tight schedule and multiple locations, the lack of road network in many areas meant that  any filming and support equipment had to be kept to a minimum.
Oussar said: “The camera is very small and easy to handle, yet it has the capability of capturing such high resolution shots. On the Himalayan shoot, there were no roads, so any equipment had to be carried and manually transported from area to area. All of our equipment had to be lightweight and robust but capable of providing the high performance required for these types of cine shoots.
“Filming in Delhi and northern India, we used a large lens on the camera to capture the big shots and the camera was supported by very a sturdy OConnor tripod which is several years old. We managed to capture all of the shots we needed, at a quality we were very happy with. We had to have the reliability and reassurance from the entire kit and crew to help us achieve that.”

Based in Germany, Amin Oussar is a Director of Photography, producer and passionate filmmaker. He spent several years of his career at various creative agencies and film-productions in Cologne, Duisburg and Dortmund in Germany.  He has shot two feature films in Germany and France, and India and his work includes various award-winning short films and commercials, one of which was nominated at the German Economic Film Awards.
As film producer, as well as editor and content developer, Amin has worked for a range of corporate clients such as AUDI AG, Vodafone, OTTO Group, the german Society for Engineering Education, Mayersche, Dortmund Airport and a range of medium-sized companies.