On set with Alex Buono 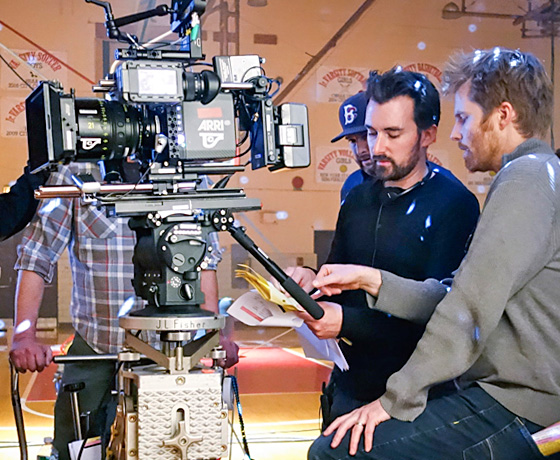 OConnor does a good job of identifying what actually is going to work in the field and what we need and don’t need. I’ve used a lot of different fluid heads, but OConnor is just so far above and beyond the performance of every other fluid head in the market.

Few sets are more hectic than the set over at Saturday Night Live; just ask cinematographer Alex Buono. After working on SNL for 17 seasons, Buono lives off the fast-paced, complex workflow of the show and there are no signs of him slowing down anytime soon.

“The show is unique in that we’re doing something new every week and have one day to do everything. We get the script on a Wednesday, prep on Thursday, and then shoot on Friday so it can broadcast on Saturday. It’s a lot of pressure,” commented Buono.

One of the DP’s more recent productions happened when former UFC Women’s Bantamweight Champion Ronda Rousey hosted the show. Positioned as an anti-bullying parody, the “Love Struck” sketch that week was not only popular and socially compelling; it also entailed a hectic schedule for Buono.

“In this case, the cast was not available until nearly midnight on Friday so it’s literally just a matter of how fast you can shoot because Ronda Rousey needs to go to sleep so she can perform live tomorrow night,” mentioned Buono. “Everything we do needs to be as fast as possible and the gear choices we make reflect that.”

For the past few seasons, Buono constructed an effective workflow by matching his camera – often a Red Dragon or ARRI ALEXA Mini – with the new 2560 fluid head from OConnor. Carrying the same functionality as the 2575, the 2560 head is specifically designed to match the needs of any portable configuration or lightweight digital cinema cameras.

According to Buono, the development of the 2560 marks an impressive step forward for OConnor engineering. “OConnor filled a hole in the market with the 2560 –usually you’re just forced to make a choice between the two extremes. All of the cameras now, even at their most built up, are probably under 50 lbs, so the 2560 is a perfect fit.”

Because of the immediacy of the SNL workflow, Buono stressed the importance of being able to move fast during production. Having the 2560 fluid head with the same patented sinusoidal counterbalance system and famous smooth pan and tilt fluid drag as the 2575 – but with 30% less weight – helps his camera crew move faster and get the work done on time without worrying about control and stability.

“There’s a lot of gear from other companies that feels like they’re just trying to hit some incredible tech spec, yet it’s ergonomically impossible to use. But OConnor does a good job of identifying what actually is going to work in the field and what we need and don’t need. It feels like they listen to camera operators and not every manufacturer does that. I’ve used a lot of different fluid heads, but OConnor is just so far above and beyond the performance of every other fluid head in the market.”

His early post-collegiate years were spent on the camera crews of studio films including Twister, Conspiracy Theory, and Armageddon. Soon after, Alex became a full-time cinematographer of indie films, music videos and at Saturday Night Live, where he has been the Director of Photography for the SNL Film Unit since 1999.

In 2003, Alex received an Oscar Nomination for the short film Johnny Flynton, which he shot and also produced. Alex repeated the role of cinematographer & co-producer on Green Street Hooligans which won both the Grand Jury Prize and Audience Award at the 2005 South By Southwest Film Festival. Following, Alex wrote, produced and shot the documentary feature Bigger Stronger Faster*, which premiered at the 2008 Sundance Film Festival.

Other credits include the award-winning ESPN comedy series Mayne Street as well as 2nd Unit DP work on the ABC series Detroit 187, the HBO series True Blood and the NBC series Chicago Fire. Alex is a member of the International Cinematographer’s Guild, the International Documentary Association and the Writer’s Guild of America.