On set with Ben Wilson 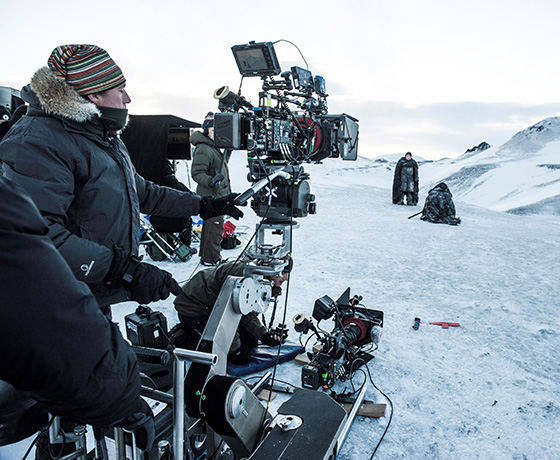 OConnor products also have the ability to handle the large camera kits extremely well. The digital cameras may be getting smaller, but we have to factor in everything else, from certain lens packages to the focus systems and monitors, the whole rigs can still be heavy. It is vital to have a decent sized, strong head, which can cope and perform under that weight.

The television adaptation of George RR Martin’s fantasy novel series, Game of Thrones, has attracted a record number of viewers on both HBO and Sky Atlantic and has obtained an exceptionally broad and active international fan base around the globe. The series has received numerous awards and nominations alongside widespread acclaim by critics, thanks to its winning combination of unpredictable and complex plotlines, outstanding acting and its creative and clever cinematography.

Now in its fifth season, the latest drama was shot on location throughout the summer of 2014, in Belfast, Croatia and Seville, and is set to be the most popular series yet with predicted record viewing figures.

Filming commenced in July last year, with a huge production running two units, the Dragon Unit, based in Belfast for the duration, and the Wolf Unit, which is the travelling arm of the crew. Ben Wilson was part of the Wolf Unit, which had an initial six week filming stint in Belfast shooting the cold scenes, and then two and a half months on the road filming “the blue sky scenes” in both Croatia and Seville.

Wilson shot using an Alexa, and during each day of filming he used his OConnor 25/75B for every shot, unless he was either shooting on a crane or steadicam. Many of the drama’s most infamous scenes, from the first main character’s beheading to the gory and lengthy battles, were captured using the OConnor head as the key support.

“All of the big scenes throughout the five seasons were filmed using the OConnor 25/75B. It was the main workhorse head, whether it was mounted on the dolly or the sticks. Occasionally we supplemented it with other pieces of equipment, for instance for the ground level shots, however on a daily basis it was the main shooting head.”

Wilson has worked with the OConnor 25/75B for the last eight years, across his vast array of filming projects.

“OConnor products also have the ability to handle the large camera kits extremely well. The digital cameras may be getting smaller, but we have to factor in everything else, from certain lens packages to the focus systems and monitors, the whole rigs can still be heavy. It is vital to have a decent sized, strong head, which can cope and perform under that weight.”

“It’s one of my most reliable pieces of support equipment. Everybody is familiar with the head, the crew are used to OConnor as it is the industry standard – a nice, easy bit of kit that people know well. During productions, directors tend to jump on to cameras to have a look, with OConnor they know where the locks are, it’s all about familiarity in this business and the head is undoubtedly well established in the industry.”

From box office blockbusters to epic serial dramas, much of the work in Ben Wilson ACO’s portfolio needs no introduction to the nation’s cinema and TV audiences. As a founding member of the Association of Camera Operators, Wilson’s impressive career has seen him play critical behind the scenes roles in major movie productions from Star Wars: The Force Awakens and Quantum of Solace, to shooting during every series of the much-watched television fantasy drama, Game of Thrones.

Wilson’s early career ambition was focused on stills photography. More than twenty years ago, he “fell into” doing stills photography on films before meeting a crew who worked out of Ealing Studios, kick-starting his path into cinematography. Based in the South East of England, his position as camera operator working across multiple major productions has seen him travel the world shooting several projects a year for the last two decades.