You are here: Home / Inspiration / On set / Bruce Melhuish

On set with Bruce Melhuish

Cinematographer for "Welcome to Curiosity" 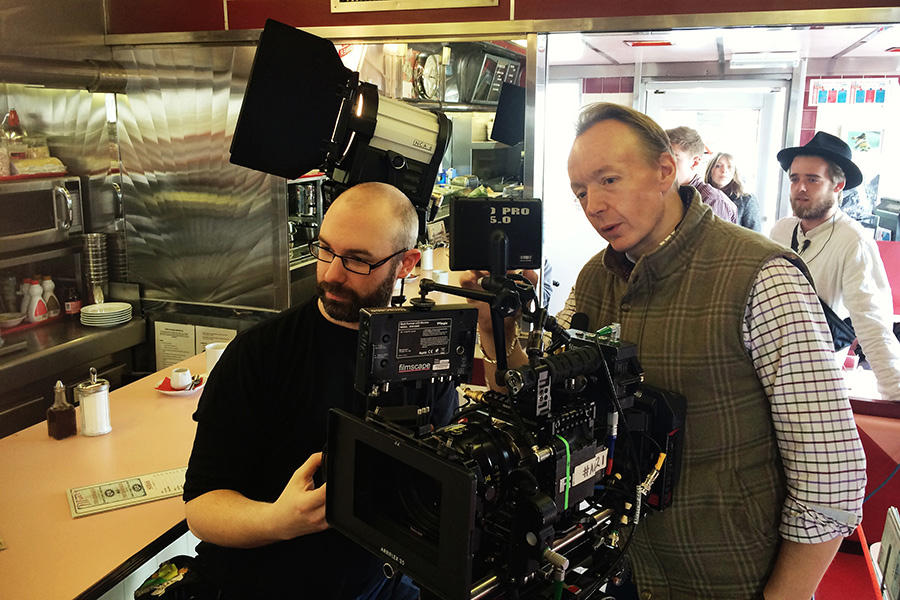 I always work with OConnor heads and I’m a big fan of the 2065; it’s lightweight and has such great balance and reliable movement that it really has become an extension of my arm, I always know what I’m going to be able to do with it.

Welcome to Curiosity is a low-budget independent feature from Jericho Lane Pictures, directed by Ben Pickering from a script by Darren Ripley. The film was shot on location in Cornwall, a stunning county where you are never more than an hour from rural farmland, rugged coastline, golden sandy beaches or barren moorland.

Welcome to Curiosity tells five stories that overlap at various points.  A heist followed by betrayal, a serial killer being hunted by a young boy, an escapee from a psychiatric hospital, a girl stepping out with a bad man and a salesman seeing things.

Planning the production for Welcome to Curiosity it was clear that we were going to have to work very fast, with a small crew and really push hard to maximize our time at each location.

We had a fantastic camera package from Filmscape in London, with a RED Epic and Cooke S4i lenses.  I love the mobility of the Epic and its low light sensitivity; I kept the camera rated at 800ASA throughout production.

Shooting to such a tight schedule we would often have two unit moves in a single day and I wanted a camera package that could move quickly between locations.  Knowing that I’d be filming in small, remote properties, I also wanted a lighting package that wouldn’t throw out too much heat and could run from mains power and, where necessary, a small portable generator.

One of my favourite locations was a beautiful 19th century farmhouse that features quite heavily in the story.  Being an old building it is very small and dark but looks absolutely amazing on camera, full of texture and the kind of character that only 150 years of being lived in can give.

With this in mind I opted for a set of LED Inca Fresnel lights from Litepanels. They have such a clean quality of light output that they seamlessly blend with the practical lighting that I like to use.  All in a package that draws such little power and generates almost no heat.

How Videndum kit supported the production

I always work with OConnor heads and I’m a big fan of the 2065; it’s lightweight and has such great balance and reliable movement that it really has become an extension of my arm, I always know what I’m going to be able to do with it.

The Litepanels LED Fresnels and 1x1s combined with Anton/Bauer batteries really gave me a lot of versatility and the ability to move quickly between setups and locations.

In one big night exterior we were quite far from the house but I wanted the interior lights to carry, so I placed three Inca 12s in the rooms, pushing out around 2K of light from each unit and only drawing around 350W.  I was able to power them from the house and leave the lamps in very small rooms with no fear of fire.

We also had a lot of night car interior shots and I turned to the Croma Kit from Litepanels; a beautifully packaged lamp that can be set almost anywhere.  It’s completely dimmable and the colour temperature can be dialled from daylight to tungsten.  I opted for somewhere in between at around 4000k and got some stunning results.  The Croma lamps have incredible run time from AA batteries.

Bruce Melhuish is an award-winning director of photography with several years of experience working in film, music videos and commercials. In 2011 Bruce shot the critically acclaimed feature The Glass Man starring Andy Nyman, James Cosmo and Neve Campbell. Kermode and Mayo' Film Review on BBC Radio One praised his cinematography for its "Hitchcockian Style".
In 2013 Bruce completed the feature comedy Art Ache, several shorts, commercial spots for companies such as Marks and Spencer, and music videos for artists, including Emilia Mitiku, Wookie and Eliza Doolittle.
Bruce is also a producer in his own right, having co-produced The Glass Man, and is currently in development on a slate of films with producing partner Cristian Solimeno. Bruce is set to make his directorial debut towards the end of 2014 with the feature film Forgiveness.
Originally from Torquay in Devon, Bruce moved to London to study at university before working in the technology sector for companies such as Arius 3D (a part of IMAX). In 2010 he made the switch to cinematography full time and hasn't looked back. Bruce has two Rhodesian Ridgebacks named Walter and Norah and is a keen horse rider and lover of all things outdoors.