You are here: Home / Inspiration / On set / Michael McDonough

On set with Michael McDonough

Cinematographer for "The Mortician" 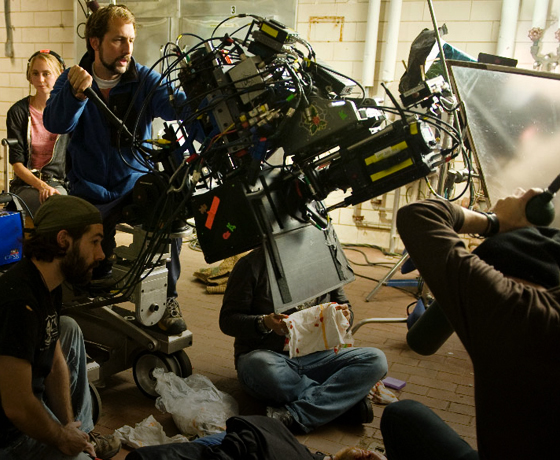 With a limited Indie budget, I knew that our production package had to be tight, strong and dependable. I worked with Mark Pederson’s team at OFFHollywood, New York, to put together the best possible support.

THE MORTICIAN, a low-budget independent 3D feature from London-based Full Circle Films, written and directed by Gareth Maxwell Roberts was shot on location in New Orleans, Louisiana to take full advantage of the devastation still almost crippling the plagued city. The film stars Edward Furlong and Method Man and is set to release toward the end of 2010.

It is the story of a mortician, played by Method Man, a sad quiet character, inhabiting a future American city where much of society’s structure has broken down. By day he works on the beaten, bruised and bloody bodies of gunshot victims and other murdered souls and at night, in his lonely apartment, he practices taxidermy (the preserving and mounting of dead animals for display) to create some peace for himself. When a young boy breaks into the morgue, and his life, the Mortician begins a series of dangerous encounters with a threatening future – leading him to discover some of his own past – and forces him out into the open and into the proverbial and physical – light.

McDonough goes behind the production

“Despite the incredible spirit of the location population as a whole, New Orleans has many areas of devastation still evident. The areas, from the flooded and damp industrial quarters around Tchoupatoulis to the mostly vacant Lower 9th Ward, were a perfect backdrop for The Mortician’s world. And it gave us the layers that are so necessary when you are shooting 3D. I seriously doubt we could have gotten those layers anywhere else.

The 9th Ward is a perfect example. There was debris everywhere. When we walked our character through this ‘debris’ it became the layered foreground and background that is part of the city and a visual playground for 3D. When we got to the plantations, the peeling wallpaper from the 19th Century all fed the 3D world.

Each location we chose was always with 3D in mind. We were looking to maximize the depth of the frame and the possibilities for layering in front of the lens. And, we looked for space within a location to accommodate the 105 pound twin RED rig – and be able to move it around.

One of my most memorable locations was outside the Dixie Brewery. It was a night establishing shot in the rain (created by rain towers) that would occupy only seconds in the timeline but would add so much mood and production value. The almost blown-out building, the field next to it, and the broken cars we brought in added to the depth and gave us the 3D material we needed.

Could we have done this movie anywhere but New Orleans? At one time they had thought about New York City. But that meant a big budget – a lot of time to recreate and to renovate. And, a lot of time to move from location to location – difficult in NYC. With New Orleans, we had none of that and we had more character for the story.

With a limited Indie budget, I knew that our production package had to be tight, strong and dependable. I worked with Mark Pederson’s team at OFFHollywood, New York, to put together the best possible support. The vertically-stacked twin RED One, Element Technica 3D rig that we chose weighed in at about 105 pounds (48 kg). When I looked at the head we’d use, I wasn’t sure what it was. At first I assumed it was an OConnor 2575, a piece of gear that I’m very familiar with – it goes on every one of my equipment lists right away.

However, on closer inspection this was different. I was relieved to see that it was a head from my favorite brand, OConnor, just a different one. This time, because of the weight of the camera setup, we were using a 120EX. With a rig this heavy, we wanted a fluid head that could make the moves we would need.

About 95% of the movie ended up being shot on this head, while gliding on a dolly. I very quickly realized that the task asked of the 120EX was easily accomplished. It helped our operator pull everything off, take after take. We had a tight schedule, a tight budget, and a lot of shots to get in the camera. The thing I’m proudest of is that we shot every set up we planned, in a manner I was more than happy with – and we physically couldn’t have done it without the OConnor 120EX.”

Scottish-born cinematographer Michael McDonough has been a grip and camera operator as well as cinematographer. He’s shot everything from America’s Next Top Model to This So-Called Disaster: Sam Shepard Directs the Late Henry Moss. He’s known for his quirky independent films like Down to the Bone (developed through The Sundance Lab), Diggers, The Baby Sitters, Quid Pro Quo and New York, I Love You. McDonough also served as associate producer on one of his most recent project, Winter’s Bone(which claimed the top Grand Jury Prize at Sundance). It opened to limited release mid-summer. McDonough splits his time between his native Scotland and New York City.