On set with Evan Prosofsky 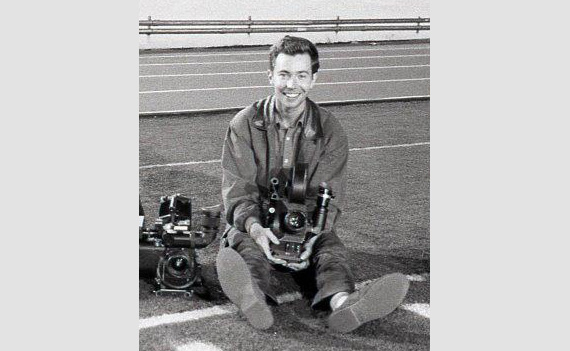 OConnor’s 2575 fluid head is the gold standard,” he says. “It handles the weight of the camera effortlessly and performs reliably – it just works the way it’s supposed to. When you’re shooting that quickly you need to rely on your equipment and the simple fact that I knew what I was working with and what to expect was a great stress reliever.

Paul McCartney’s latest album, New, was released in October 2013. The legendary songwriter’s 16th studio album includes the song “Early Days,” a nostalgic reflection on when he and John Lennon were young, aspiring artists. Director Vince Haycock was brought on board to turn that track into a music video. Haycock storyboarded a narrative piece about the spirit and inspiration young musicians find in each other. He chose to set the story in the Mississippi Delta for its blues influence that heavily inspired the Beatles.

In the video, viewers are transported to a mid-20th century town where teen boys gather and start strumming their guitars. As the narrative progresses, it cuts from McCartney singing the lyrics in an old bar to the boys’ blossoming relationships. Musical talent develops and life begins to transform them from boys to young men. Partway through, the boys are deeply affected when one of them encounters the death of a loved one, and we see them channel their sadness into making music. The scenes convey a sense of collaboration and determination to pursue their dreams of being musicians. Images of McCartney jamming with blues musicians round out the tale, and are intercut with scenes of the boys and their band playing for friends.

An official “Making of Early Days” was released October 28 as part of a special collector’s edition of New, which features highlights and exclusive material chronicling the release and promotion of the album.

Cinematographer Evan Prosofsky and Haycock have worked on several commercials and music videos together. When the director told the DP about his idea for “Early Days,” they both agreed black-and-white film was the best origination medium to capture the story. They felt the quality of the look realized the vision for the video.

“It was really refreshing to work on something more narrative, versus just a band performing on screen,” notes Prosofsky. Prosofsky had previously shot Arcade Fire’s “Afterlife” in the black-and-white format too. The video went on to win a Prism Prize for Best Canadian Video of 2013.

Shot over four days, the production rented their gear in New Orleans from Keslow Camera and drove to Natchez, Mississippi, where they recruited non-actors from the region. The crew shot an additional day back in Los Angeles, where McCartney jammed with blues musicians flown out from Mississippi, and were joined spontaneously by Johnny Depp.

Prosofsky believes that shooting in black-and-white on old anamorphic lenses helped “Early Days” stand apart from other music videos. “This is an emotional song about growing old and reminiscing,” he explains. “The visuals needed to match the theme of the song. There’s something idyllic about the way the highlights glow in black and white and the soft contrast of the lenses add character to the scenes.”

Once on location, Prosofsky knew he would need his set ups to respond quickly to the spontaneous activity in front of the camera. He and Haycock scouted locations and chose spots that worked well with just natural light. “We wanted the kids to feel comfortable, since this isn’t something they’ve done before. We didn’t stage too much, and we wanted to keep things very natural.”

The cinematographer adds that it was hard not to reference the look Oscar®-winner Emmanuel Lubezki, ASC, AMC achieved on The Tree of Life. Prosofsky worked closely with the production designer Jason Hougard to control colors, textures, and window light. Since he didn’t have a lighting package, he could shoot in a semi-run-and-gun style. “It was very freeing.”

The camera package consisted of an ARRICAM LT and ARRICAM ST loaded with 35mm EASTMAN DOUBLE-X film, and mounted with Hawk anamorphic lenses.

Prosofsky used both close-ups and wide shots to establish the scenes. Accomplishing 8-10 set ups each day, one camera was on a stabilizer with the other locked down on an OConnor 2575 fluid head and Cine HD tripod. He also carried a hi hat for a few low angle shots.

“OConnor’s 2575 fluid head is the gold standard,” he says. “It handles the weight of the camera effortlessly and performs reliably – it just works the way it’s supposed to. When you’re shooting that quickly you need to rely on your equipment and the simple fact that I knew what I was working with and what to expect was a great stress reliever.”

For a particular scene of the boys running through a field and then running through the town, Prosofsky and the six-person crew – consisting of a 1st AC, 2nd AC, grip, gaffer, and AD – hopped on the back of a truck, strapped the pre-rigged 2575 with the hi hat down, and followed the kids to capture the action.

“Vince and I were striving for natural performances with natural photography,” he says. “I know from working with him on previous projects that he expects speed, great lighting, and sharp focus. The best thing I could do was make sure the crew understood that we were working on the fly and how best to do that, especially to capture those moments when the cast, all non-actors, were off guard between setups. There were spontaneous moments that contributed so much to the story, and we had to be ready to capture those. The OConnor gear helped make that possible.”

Evan Prosofsky represents the current generation of emerging cinematographers contributing to compelling visuals in new ways. He got his start making skateboard videos with friends in his early teens. Wanting his work to look more professional, he turned to the Internet, and read everything he could about how directors of photography get their shots. That research, along with American Cinematographer magazine, improved his craft. He started making music videos for friends who were musicians, after moving from his native Alberta to Montreal. Shooting 35mm film, he posted the videos online, got hits, and landed an agent. His growing list of credits consists of music videos for artists such as Lana Del Ray, Arcade Fire, Raffertie, Paul McCartney, Lorde, and the Prism Prize-winning “Afterlife” for Arcade Fire, which took Best Canadian Video of 2013. Prosofsky’s commercial work includes spots for Facebook, Adidas and P&G, among others.