On set with James Bagdonas 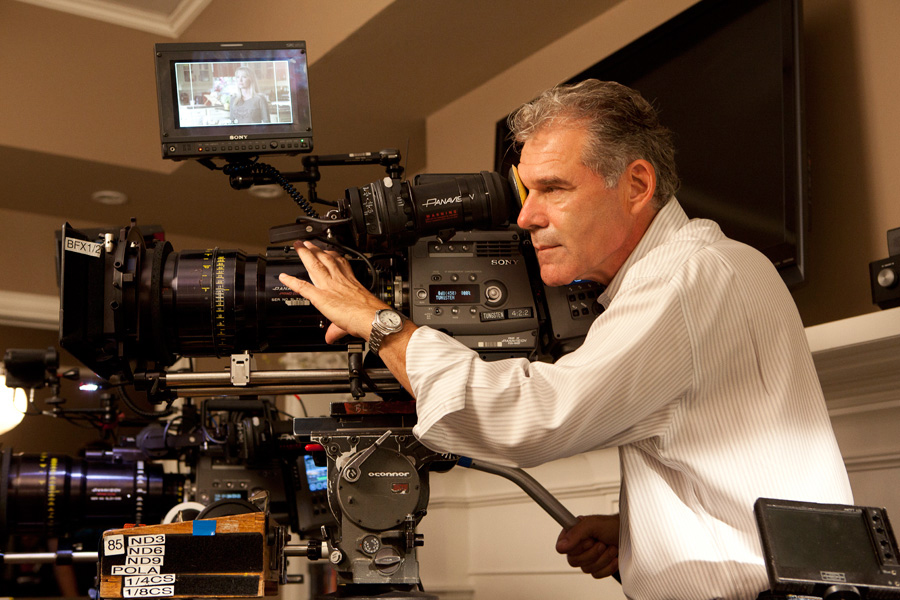 We use the OConnor 2575 because no other fluid head has such great balance through a wide range of motion. I prefer to use the new 120 EX head at times, especially with some of the heavier zooms.

Anyone who watches Modern Family, the ABC/20th Century Fox mocumentary about one big (straight, gay, multi-cultural, traditional) family will instantly relate to something. Whether it’s tragic or complicated or funny, you’ll find yourself saying “That happened to me!” Its logical, since creators Steven Levitan and Christopher Lloyd have really tapped into the modern family. In fact, a great deal of the story grows out of sometimes off-hand conversation between everyone who works on the team. Members of this production are learning the hard way to watch what comes out of their mouths. A comment about an incident at home has more than once shown up in an episode or two! Since it first aired in 2009, Modern Family has won Emmys for Outstanding Comedy, Casting, Editing, Sound Mixing, Supporting Actor and Writing with nominations for Directing, Guest Actor, Editing, and Supporting Actors, not to mention a DGA, WGA, Peabody, and Television Critics Award as well as various other nominations. It’s a hit!

“One of the things that make this series so popular is that this family admits they are dysfunctional but, in the end, even though they know each other’s shortcomings, they love each other,” explains cinematographer James Bagdonas ASC.

Bagdonas goes behind the production

Going into the project Bagdonas knew he would have a limited budget and that production was determined to keep short hours and go through the set ups quickly.

“We shot the pilot on practical locations but to keep our promise we knew we had to create sets on stage that would make the locations appear to be real,” he explains.

They could design sets like real locations and wild the walls so that equipment could get in and out or make the sets bigger and treat them like practical locations. “This is a ‘documentary’,” Bagdonas explains. “If we were following these families in their home environments, we couldn’t always put a light where we wanted and our sources would often be sketchy. By building larger sets we could ‘document’ life as if it were really happening at that moment. The design; capture the families with two cameramen standing in the room watching these people go through their lives.”

Each scene is a single set up. It is done with two cameras almost opposing at 45 degree angles. Characters walk in and out of the shot. The actors often improvise dialog and move with the moment. “Often times we hear a person say something but don’t see them,” he explains.

The style scared the network at first. But they, too, got used to it. And realized this approach was garnering a lot of attention which, of course, translates to ratings and those all important awards.

While the pilot was shot with the Genesis, the series is shot with two Panavised Sony F35s. “Choosing cameras today is like choosing film stock,” says Bagdonas. “You choose the look you want by the camera you use. I wanted a filmic look and that meant a hybrid camera system where we could shoot digital but use film-style accessories. We’ve paired the lens package down to two Primo Zooms (24-275mm, T2.8) and two Optimo lightweight zooms (15-40mm and 28-76mm, T.28).”

“Starting with Boston Legal and then on Modern Family we began to use a style of shooting that could only be done with a fluid head,” he explains. “That is to say that the operators must always have a hand free. What that enables us to do, is constantly change the frame size on the zoom lens. Many of the shots are not rehearsed and at times the operators even have to grab the focus knob!

“A good example would be the dumphy kitchen scenes in Modern Family,” he adds. We usually have four to six people all moving about the business of the day. They go into the refrigerator, get something from the cabinets, and in this fray we try at times to go for their hands or pan with a look to a POV and any other opportunities that just ‘happen’. This creates a very ‘captured moment’ look.

“We use the OConnor 2575 because no other fluid head has such great balance through a wide range of motion. I prefer to use the new 120 EX head at times, especially with some of the heavier zooms. With a head that was designed to carry more weight, it still gives you a lightweight feel.

“As style and my own personal likes change, I can’t see using any other head. OConnor has always been the best. It just feels good in your hands. And that gives you the confidence to go for it!”

California-based cinematographer James R. Bagdonas ASC literally worked his way up through the camera system. He was an assistant on many television movies, an operator on series such as Hunter. As cinematographer, he shot over 50 episodes of Lois & Clark: The New Adventures of Superman, 25 episodes of Chicago Hope, as well as close to 70 episodes of Boston Legal. He has also directed close to a dozen television episodes. Bagdonas has been nominated for four Emmy Awards (Chicago Hope and the television mini-series Hidden in America as well as three ASC Awards for Hunter and Chicago Hope.