On set with David Connell 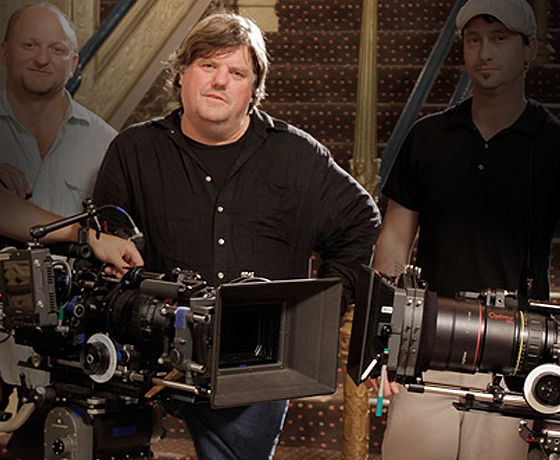 I have always relied on OConnor for my support. The system is consistent, easy to use and stands up to the rigors of episodic television. The ultra-smooth pan and tilt fluid drag gives me consistent control and stability.

LEVERAGE, starring Timothy Hutton from Dean Devlin’s Electric Entertainment, is a caper series tabbed a combination of THE ROCKFORD FILES and MISSION IMPOSSIBLE with a little IT TAKES A THIEF in the mix. This fast-paced one-hour series is very unique in television production in that it is completed totally in-house. Devlin has built a total one-stop-shop. Once the footage is captured in Portland, the drives and cards are taken to the ingest trailer and copies are made. Then everything works off the master server at Electric Entertainment’s Los Angeles headquarters using Final Cut Pro. The pipeline continues to go room to room at Electric until it is blasted across the TNT airwaves each Tuesday night.

Cornell goes behind the production

We’re capturing it with the same cameras we chose for third in The Librarian series,” says Connell. “The RED was build 13. Not as good in low light but a remarkable camera. Now we’re shooting with Build 30. It includes a new chip with Mysterium-X with an 800ASA. That means the need for fewer lights and the ability to go out and shoot night exteriors with a minimum amount of light.”

Connell feels he’s hitting his stride this season. All his cameras are equipped with Preston single channel Iris controls an on-board Marshall monitor for A-camera and EVF support for B-camera. A-Camera uses an EZ-Rig to support an Optimo 17-80 zoom while B-camera is using primes. “And, of course, OConnor for support.

“We do some really cool and different shots,” he explains. “We average about 54 set ups per day – including our signature Ninja Zoom and Bullet Time shots.

“The Ninja Zoom is an extremely wide shot that zooms in to an ECU,” he explains. “The typical zoom is done in three segments, with the RED camera on the OConnor head with an Optimo 24-290. The initial shot is composed and the total distance is measured from the first position and divided into three segments, utilizing two other zooms to get the desired effect. Typically, the center cursor on the viewfinder is used to position tennis balls mounted on c-stands at the end of ever third segment (i.e. the total distance to subject is 90 feet, the c-stands are placed every 30 feet). The position and height is recorded and the markers removed. Being that we are using three segments, the beginning of the shot is framed with conventional head room, however, the end of the shot must be framed centered.

“After the first take (the talent must remain perfectly still during the entire procedure), the inclination is recorded, the dolly takes the camera to the second height and position is determined earlier with the markers. The shot is composed centered from beginning to end and then repeated for a third time to complete the zoom with the only difference being the end frame is composed with traditional head room. The process rarely takes more than five minutes to complete and the entire shot is stitched together in post and sped up many times over.”

The Bullet Time shots are done off the camera stabilizer, starting with live action – normally a wide shot. “We freeze all the performers and the camera travels normally form one end of the set to the other,” he explains. “Then picks up our main actors in close-up. Then we call unfreeze and the scene continues. The freeze action of our shot is sped up in post for a normal travel could take 30 seconds but, this is all over in two to three seconds. The reason for the freeze is so, when it is sped up, the performers don’t look like they are walking in fast motion.”

The backbone of our support is OConnor’s Ultimate Head,” says Connell. “It’s simply the best solution for the challenges we face. The RED might be a modular system, however, that certainly doesn’t imply that it is lightweight. When fully accessorized and wearing an Optimo 24-290, a RED camera will weigh as much as any 35mm camera system, thus it deserves to be supported as one.”

OConnor is key to the success of the Ninja Zooms. “The OConnor is rock-steady,” he says. “It gives us the ultimate control needed when doing these in-camera effects type moves.

“I have always relied on OConnor for my support,” he adds. “The system is consistent, easy to use and stands up to the rigors of episodic television. The ultra-smooth pan and tilt fluid drag gives me consistent control and stability. The counterbalance is accurate at any point in the tilt range. And, the pan and tilt fluid drag is ultra-smooth. When I’m using OConnor, I know I can challenge my camera to up the anti in any action segment, without worrying about getting the take and moving on to keep up with a fast-paced production schedule.

Born in Melburne, Victoria, Austra, David Connell has won two CableACE Awards as Director of Photography/Lighting Direction for the television projects Fortress and Twilight Man. He’s been honored with the Australian Award of Distinction for the feature The Snow Walker and for the Telefeature/Mini Series Moby Dick. He was also nominated for the AFI Award “Best Achievement in Cinematography” for Boulevard of Broken Dreams. A long-time collaborator with Dean Devlin, he is in his fourth season of Leverage.