Home » Inside OConnor » The OConnor Story

OConnor Engineering Laboratories was founded in 1949 by Chadwell O’Connor. Chad, once a designer and builder of steam power plants, always had a passion for steam locomotives.

In the late 1940s, he decided to document them on film before they were all gone, but found it impossible to pan smoothly with his Bell & Howell camera. To solve this problem, Chad designed and built a Fluid Head camera support that would allow his lightweight camera to follow the moving trains without jumps, and distracting starts and stops.

One day, in 1949 while he was filming the trains at Glendale Station, another steam train enthusiast noticed this unusual setup and stopped to ask a few questions. He liked the concept, and asked Chad to build a Fluid Head that would solve pan & tilt problems on his new film, ‘The Living Desert’.

The man was Walt Disney.

Disney was so happy with his first OConnor head that he immediately ordered 10 more. His film, The Living Desert, won the first Academy Award for Documentary Feature in 1953.

To produce his new fluid head, OConnor founded a part-time business in 1952, first building them in his garage and then from a small factory on Green Street in Pasadena, which his wife Regina ran during the day.

By 1969 OConnor Engineering Labs was so successful that OConnor left his “day job” at Pasadena Power and Light to work full time on camera heads and steam engines at O’Connor Engineering. He enjoyed working with cameramen, by inventing solutions for their needs.

He produced thousands of OConnor fluid heads and legs, from the ever-popular O’Connor 100, so renowned for its ruggedness that it is still a staple of camerawork worldwide, to the new OConnor 120EX, which was made to complement today’s high-end film and television production.

Today OConnor Engineering specializes in heavy-duty fluid heads, tripods and camera accessories. As a Videndum brand, OConnor has a large dealer networking spanning the United States and in more than two dozen countries across six continents. 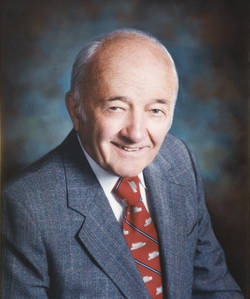 Chadwell (Chad) O'Connor, founder of OConnor Engineering, was an inventor, steam engine enthusiast, and is most remembered as the inventor of the fluid-damped camera head, an achievement for which he won an Academy Award in 1992.

O'Connor’s early home environment in his native Boston likely contributed to his active mind. Johnson O'Connor, his father, was a well-known psychometrician and pioneer in the study of aptitude testing. His mother died while he was young, and his father remarried MIT-trained architect and educator Eleanor Manning.

Learn More About Our Founder