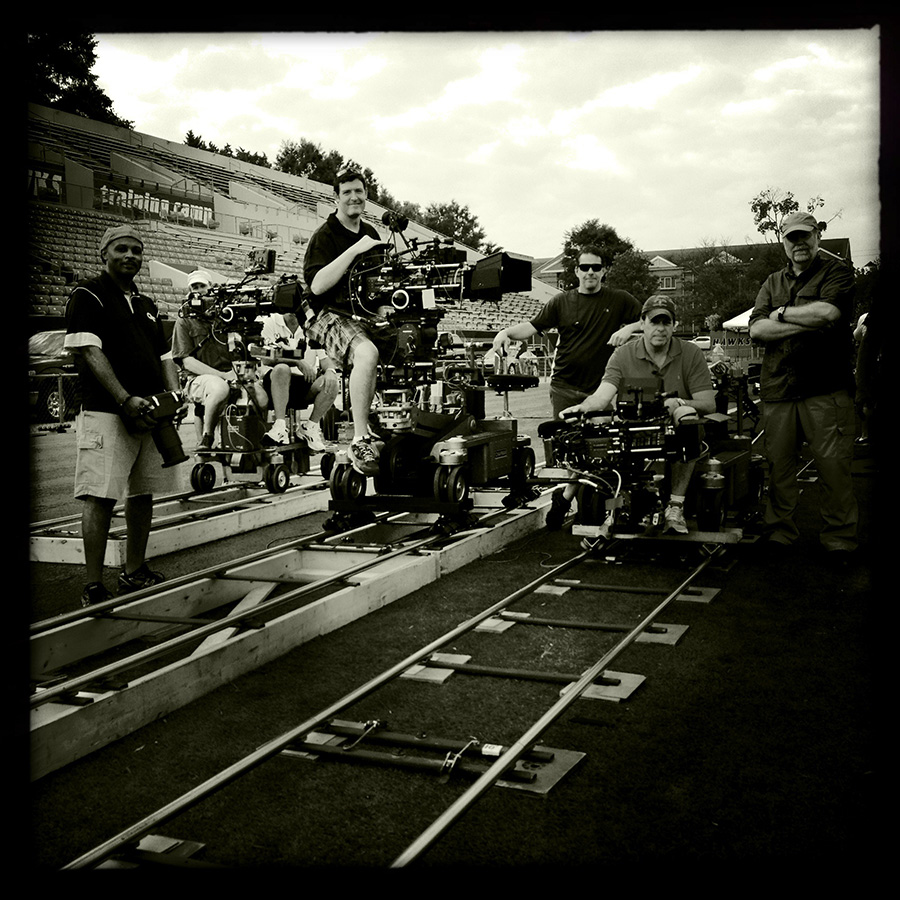 Burbank, CA, November 30, 2012 – Bill Wages, ASC is glad to be shooting USA’sNecessary Roughness on location in his hometown of Atlanta, Georgia instead of commuting to far locations. When the ASC Television Career Achievement Award winner packed for the move back to Atlanta, he made sure that his most vital tools would be on hand for his new series. High on the list was the OConnor 2575 and “a really old but extremely reliable OConnor 100,” he adds. “I won’t do a show without OConnor.”

Necessary Roughness is a series about a female psychologist whose main practice is the fictional NFL team, the New York Hawks. “Atlanta for New York,” Wages laughs. “You gotta love Hollywood’s creativity! Actually, we really do get a lot of mileage out of the various local locations. Since she treats other sports and show business patients, we end up with a wide variety of subjects – and an even wider variety of challenges. We average 50 to 60 setups per day. One day I’ll be shooting a football game, and the next a rock-and-roll concert. Because of the amount and range of set ups, my support is crucial. There is no room for error. That’s why I chose OConnor’s 2575 – and no gear heads.”

Wages says he has never seen a shot that he can’t do with the 2575. “But I’ve seen a lot of shots that a gear head couldn’t do. Sure, there’s a place for both but with a large package like ours (four ALEXAs), I have no room for excess, so the OConnor 2575 fluid heads were it.”

While shooting football scenes, Wages goes for documentary-style shooting that is rather free form. And the OConnor shines. “It’s very intuitive. No restrictions, even when we point almost 90-degrees up and down. My A-camera operator, Steve Andrich, shoots for the NFL so he knows how to follow a passed football with a 500mm lens and fill the frame. He never loses it with the OConnor. Try it with a gear head. Not possible.”

Wages really puts OConnor into challenging positions. To get a very low angle, he will hang the head and camera upside down on the dolly to get right to the ground. “Comes in handy when tracking player’s feet as they run,” he says. “I know, the OConnor isn’t designed for this but it gets the shot.” And in post, the image is inverted with a push of a button.

Sometimes he brings in his OConnor 100, “once owned by Fouad Said (his name is engraved on it). It was used on the original I Spy,” he laughs. “This thing is so strong that when I’ve used it on other projects, Joe Dunton has built a side-sling rig for me to allow the camera to sit beside the head, just above the ground for an extremely low angle. I’ve put a Panaflex with an 11-to-1 and 1000 foot magazine on it with no problem. This is a tremendous amount of torque – on a 50-year-old piece of equipment. You simply can’t hurt it!”

Necessary Roughness, starring Golden Globe nominee Callie Thorne, will begin airing new episodes on USA in the coming months. Bill Wages, ASC is a two-time winner of the ASC Outstanding Achievement in Cinematography award for Buffalo Soldiers and Riders of the Purple Sage. He has also been nominated for six other ASC Awards and two Emmy Awards.