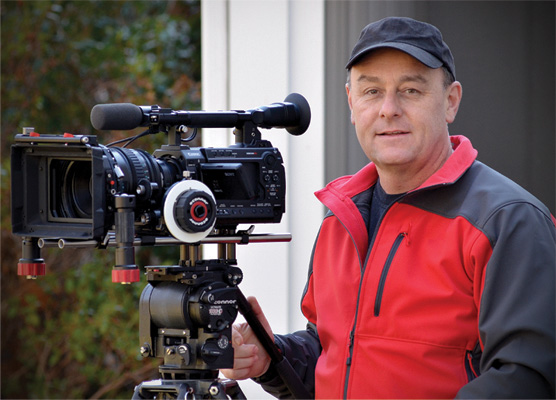 Burbank, California: March 1, 2012 – Producer/Director/Cameraman Doug Jensen has been a fan of OConnor, part of Vitec Videocom, a Vitec Group company, for 30 years. When he formed Vortex Media, OConnor tripods and heads became a permanent part of his camera package. “I’ve used the same 1030B and 35L legs for years, as I migrated from Betacam to HDCAM and now XDCAM,” he says enthusiastically. “The stuff is built to last! I consider OConnor products the gold standard for top-of-the-line equipment.”

When Jensen learned that OConnor was going to manufacture a new line of camera accessories he was immediately interested. “So, this year I’ve outfitted my Sony PMW-F3 camcorder with the O-Box matte box, Universal Camera Baseplate, O-Grips handgrips and CFF-1 Follow Focus System,” he says.

Recently Jensen was shooting stock footage in three U.S. national parks and says he would have missed several opportunities to shoot wildlife and landscapes with fast-changing lighting if it weren’t for how quickly and efficiently OConnor accessories allowed him to work. “They are strong enough that I don’t need to take them off the camera and put them away after every set up,” he says. “I keep the set-up in a large camera case and can pull it out and place it on the 1030B tripod to be ready to shoot in a matter of seconds.”

“I can’t stand flimsy camera accessories,” he says strongly. “The O-Box is built like a tank – yet it is still very lightweight. I have never seen any matte box that even comes close to its ruggedness. It reminds me of something that is built to military specifications.”

“The smoothness and precision of the CCF-1 can’t be matched by any other follow-focus system that I have used,” he adds. Jensen usually shoots wide-open at T2.0-3.0 apertures with PL lenses up to 300mm. “So, it is essential that I use a follow-focus system that doesn’t have any sloppiness,” he explains. “I do my own focusing and I need to nail it every time because there are no retakes when you’re shooting documentaries, reality, news or landscapes and wildlife. The CFF-1 gives me a consistent feel and control, no matter which lenses I’m shooting with at a given time.”

For Jensen shooting with a matte box outdoors is not just an option, it is mandatory. The matte box shields the lens from stray light flares and it protects the front from the elements. “It allows me to use glass filters that are impossible to replicate in post,” he says. “Some people mistakenly believe that you can shoot clean and then use today’s computer software to add filter effects. Well, for some effects that might be true, but there is still no substitute for a real polarizer and grad filters. The polarizer needs 360-degrees of rotation, and the grad filters need a wide range of vertical adjustment. The O-Box allows both of those functions quite easily. It also gives me the ability to keep both a polarizer and a .6 ½ grad filter loaded 90% of the time.”

When he needs to take his camera off the OConnor head and tripod, the quick-attach O-Grips make shooting handheld with his F3 comfortable. “They give me pistol-grips that are perfectly situated for manoeuvring the camera smoothly and comfortably,” he says. “The articulated arm with its ball joint allows me to get the O-Grips into any position I want and to change it at a second’s notice when necessary.”

For handheld shooting he moves his viewfinder from its normal mount near the rear of the camera to the cheese bar that is built into the top of the O-Box. “There are several sturdy, threaded, mounting points that I can use to put the viewfinder in a forward position for handheld,” he says. “Having a matte box that is built to mount accessories saves me the cost, hassle, and the extra weight of adding additional articulated arms.

Jensen appreciates that he can mount the O-Grips directly to the matte box instead of using rods, explaining “they move with the O-Box if I need to slide it forward or backward to accommodate a different lens length. The O-Box and O-Grips become one unit that is superior to handles or grips that mount to rods.

“On occasion, I have attached two of the O-Grips together at the top of the camera and used them as a handle for shooting handheld with the camera just inches off the ground,” he continues. “I could never get that position while running or walking with the naked camera. With infinite positioning options and the nice rubber grip, the O-Grips are the perfect accessory for manoeuvring the camera.”

“OConnor’s accessories simply gave me a fully integrated, rock solid, tight camera package that was built like a tank for this stock footage shoot – and will continue to do the same on every shoot I do from now on.”

Doug Jensen’s Vortex Media captures images for stock footage, documentaries and other on-air productions as well as for his series of training DVDs which focus on a range of subjects from specific cameras to various styles of image capture.