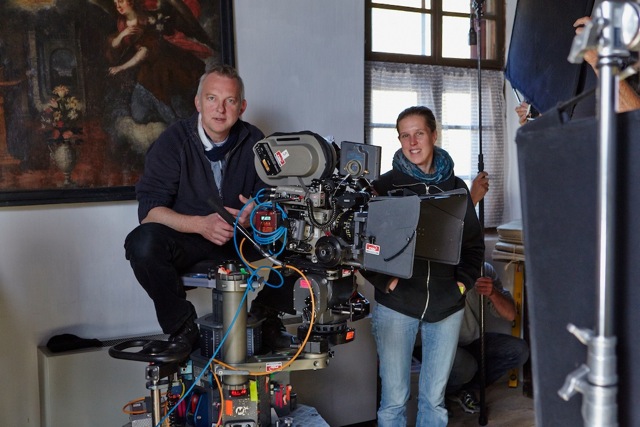 Burbank, California, USA: December 2013 The historical film Frei is a fictitious story about a romance between an SS-Obersturmbannfuhrer and a Jewish Holocaust survivor. The historical backdrop is the ratline, a Nazi escape route after the war. The work on the film took director Bernd Fischauer and DoP Markus Fraunholz to South Tyrol and Trieste. The scenery and atmosphere there had to match those of the original locations – among others, Buenos Aires. This required intensive preparation and planning to the last detail. To implement the 88 motifs in 27 days, Fraunholz needed camera support that would precisely carry out every predetermined setting. That is why he depended on the robust and innovative 2575 fluid head by OConnor, a part of Vitec Videocom, a Vitec Group company.

“Sets for historical films are really fantastic, warm, and beautifully lit. Sets and costumes alone make for a great effect. It is then very tempting to capture a picture that is too beautiful. However, I am always very determined to film the story realistically. My goal is for the audience to not notice the camera and for them to feel like they are directly taking part in the story,” explains the DoP. “The fact that my camera can remain in the background has a lot to do with fluid camera operation. The 2575 helps me achieve this with extremely smooth pan and tilt movements, a familiar feature of OConnor products. When shooting in narrow spaces, it also proved itself to be very compact, while still providing me with the necessary freedom of movement. For example, we filmed in a very narrow staircase. Looking down from a vantage point above, we follow somebody going up the stairs. With the +/- 90-degree tilt range of the 2575, I was able to capture the scene perfectly. Without holding or pushing the camera, the OConnor fluid head can also be quickly and evenly panned upwards to a 100-degree angle.”

Reality of the atmosphere
“For historical films, it is particularly important to find the right look. Which camera setting can have the best effect on the film? To this end, the movements of our two Moviecam Compact Mk2 cameras were choreographed,” says Fraunholz, describing filming conditions. “For my camera support, this means being able to identically reproduce each setting. Filming on 35mm film stock required steady and controlled camera operation. That’s why the OConnor 2575 fluid head is perfect for me: It is extremely robust but still enables me to use very precise, reproducible settings. The 2575 fluid head features a numeric display and a handy crank, which enable an exactly repeatable configuration of the counterbalance.”
“I have used OConnor fluid heads since my first film in 1997, and I am convinced of their durability and mature technologies,” explains Fraunholz. The 2575 fluid head is designed for set-ups weighing up to 40.8 kg (90 lbs), which can be precisely balanced with the patented stepless counterbalance.