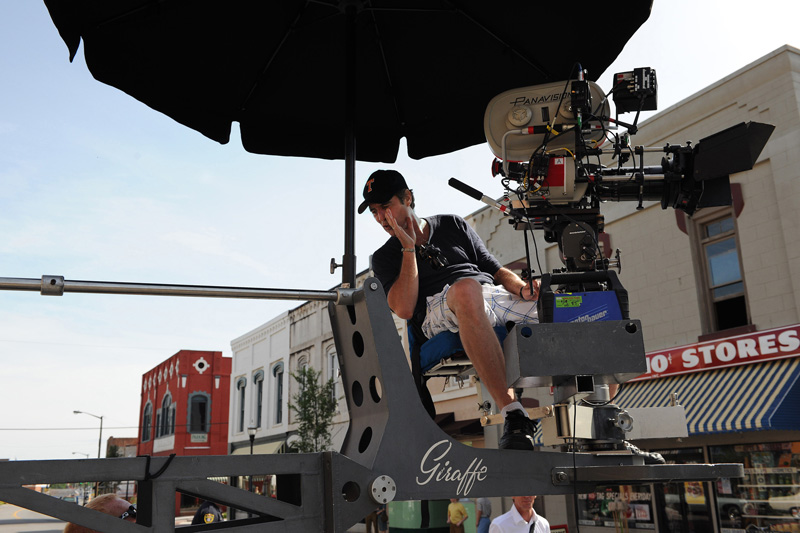 Shot entirely on location in Georgia, “Jayne Mansfield’s Car” is a culture-clash story set in 1969 Alabama, and stars Thornton, Robert Duvall, Kevin Bacon, Robert Patrick, John Hurt and Dennis Quaid. “We chose to shoot on 35mm 2:40 3-perf with two Panavision cameras,” says Markowitz. “My second camera was outfitted with an OConnor 120EX at all times.”

“When a quick pan is involved to make a shot, as in any type of action sequence, the OConnor always does the trick,” he says. “It seems to allow the operator a reassuring control when you land at your finishing frame. No spinning of the wheels to hit your mark. The drag control settings allow you to put your muscle behind a quick pan, which enables you to have total control of your panning speed. It’s akin to pushing off the side of a pool when you want to get a better start and more traction when in a race.”

“In the opening shot, Robert Duvall is driving down Main Street and the camera has to pan 240 degrees at a very rapid pace,” he explains. “For a shot like this you try not to pan too quickly for fear of strobing. The OConnor helps me handle the pace and fluidity to get it right.”

The 120EX was a perfect match for this picture. As they added longer and heavier lenses for action sequences Markowitz appreciated the system’s extra boost capability that allowed him to instantly extend beyond the standard payload. He also took advantage of the system’s 90-degree plus/minus tilt range, to capture more dynamic action.

“OConnor has been around my block for years,” he adds. “It has constantly kept up with industry demands and high standards. Back in the day when I was an assistant, the OConnor was always there to make complicated operating jobs seem easier.”

“Jayne Mansfield’s Car”, which marks Thornton’s return to directing after a 10-year break, is the fifth pairing of Thornton and Markowitz. The two also worked together on “Sling Blade”, “The Apostle”, “All the Pretty Horses”, “Daddy and Them”. “Jayne Mansfield’s Car” is now in post-production and is slated for festival viewing and general release late 2012 or early 2013.