Camera Moves on ‘The Americans’ Achieved with OConnor 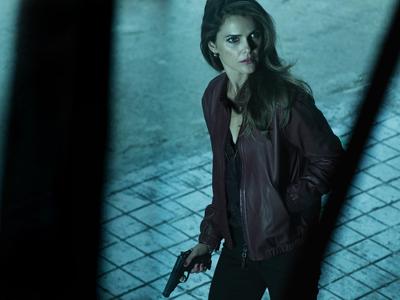 Cinematographer Richard Rutkowski and camera assistants Brendan K. Russell and Rory Hanrahan relied on OConnor fluid heads and tripods for the second season of FX’s The Americans. The camera department carried two OConnor 2575 fluid heads, and Russell and Hanrahan developed an innovative use for them. “We’ve often had to get the lens as close as possible to the ground,” Russell explains. “The best technique we found was to under-rig the 2575 to the jib arm. Then we set up our camera with a low-mode bracket that mounts on the top of the camera and attached a quick release plate to that. We mounted the camera and the head upside down, allowing us to get an inch off the ground without anything inhibiting our movement.”

Anton/Bauer, Litepanels and OConnor Keep The Americans Camera Department on the Move

BROOKLYN, NY (May 22, 2104) – The camera crew behind the hit FX TV series The Americans chose Vitec Videocom brands to support the production through its second season. The show’s cinematographer Richard Rutkowski, and camera assistants Brendan K. Russell and Rory Hanrahan, rely on Anton/Bauer batteries and chargers, Litepanels LED lights, and OConnor fluid heads and tripods for their reliability and durability during stage and location shoots, which helps keep the show on pace and on budget.

The season two finale aired last night, and The Americans returns with all new episodes in 2015.
One of television’s most critically-acclaimed dramas, The Americans follows the complex marriage of two KGB spies posing as Americans in suburban Washington D.C. shortly after Ronald Reagan was elected President. The arranged marriage of characters Philip and Elizabeth Jennings (played by Matthew Rhys and Keri Russell) grows more genuine by the day but is constantly tested by the escalation of the Cold War and their interactions with the dangerous network of spies and informants they come into contact with.

Anton/Bauer DIONIC HC® and award-winning CINE VCLX® batteries are used exclusively to power the series, which is shot using two ARRI ALEXAs as the A and B cameras, and two additional ALEXA PLUS cameras.

“We’ve been able to reduce what used to be a headache of cables,” says Rutkowski. “We can put the DIONIC battery on the back of our wireless transmitter and sit the transmitter on the back of the Alexa, making us a self-contained shooting unit. The guys hook up to an Anton/Bauer CINE VCLX between takes, then they pull the VCLX battery cable out, and we run off the DIONICs. It gives me the ability to walk around utterly free while broadcasting full HD, and that’s pretty remarkable.”

Brendan Russell, second assistant on the A Camera, adds, “We’re able to swap back and forth between the two batteries fairly easily without ever having to power down the camera. That keeps things moving quickly and efficiently, which is vital on set.

“And the ability to break away and use the DIONICs alone is really beneficial,” he continues. “The Americans features a lot of conversations inside cars, and we often find ourselves strapping a stripped down camera to a car mount – just the lens, the camera, and the DIONIC HC battery. It allows us a lot more versatility and the ability to get into tight spaces and angles.”

The video village cart can also run entirely off the Anton/Bauer CINE VCLX batteries. “We go off of the power provided by our electrical department when possible, but in order to be quick and on the move, and to get an image up for the director as soon as we can, we’ll often go with the VCLX batteries,” says Russell. “And if our location restricts us from getting any power from electrics, we can subsist all day off the VCLX batteries. We also wear DIONICs on the back of the two 7-inch monitors that are primarily for the DP and director outside of the video village.”

Rutkowski also utilizes Litepanels’ signature 1×1 LED panel to keep them on the move. “We use a 1×1 panel in cars quite frequently on this show. We’ll also sometimes use them on streets or other exteriors where I’m going to have a hard time getting a power source. Since it’s an LED, I can snap a battery onto the back of the panel, and it will last quite a long time.”

The camera department also carries two OConnor 2575 fluid heads at all times, primarily for use on the A and B cameras. “The 2575 has absolutely become the industry standard fluid head,” comments Rutkowski. “It’s what every operator I work with asks for.”

During this past season, Russell and First Assistant Cameraman Rory Hanrahan developed an interesting way to use the OConnor 2575’s innate flexibility. “You have to figure out how to get certain angles for more interesting shots, and we’ve often had to get the lens as close as possible to the ground for our show,” Russell explains. “We tried a few different ways, but the best technique we found was to under-rig the 2575 to the jib arm. Then, we set up our camera with a low mode bracket that mounts on the top of the camera and attach a quick release plate to that. We mount the camera and the head upside down, allowing us to get an inch off the ground without anything inhibiting our movement.”

Rutkowski’s classic OConnor 100 fluid head frequently gets called into action on set too. “We have Richard’s 100 on one of the mounts on our lens cart, and everybody in our camera department knows what to do when Richard calls for it,” says Russell. “It’s a lower profile head, so if we’re on a hi-hat, or boxes or even the dolly, instead of having to wait for different parts, we can throw the 100 on and get clearance of 4 to 6 fewer inches than we could get before. It really helps in getting low angles, and it also comes into play a lot for us when we’re working with process trailer rigs, so we can get low over a car hood.”

All of the Anton/Bauer batteries, the Litepanels fixtures, the OConnor 2575 fluid head, and the two ARRI ALEXA PLUS cameras are furnished to the production through ARRI CSC. The team from ARRI CSC worked closely with Daniel Brosnan, Video Utility for The Americans, and Yusuke Sato, Second Assistant, B Camera, to bring additional functionality to some of the Anton/Bauer batteries used on the show.

“They worked with the guys at CSC to create a genius piece for us,” notes Russell. “When we needed to get into really tight spaces, we were able to actually mount an Anton/Bauer VCLX battery and our wireless transmitting system, running off of a DIONIC Gold Mount wired with an XLR power cable, onto the back of the dolly. It was great to work with them and come up with new, cool ways to bring us added functionality with this gear out in the field.”

“Working with Richard closely and listening to his vision helped us identify with the unique shooting conditions they planned,” says Matthew Kolze, camera service department manager at ARRI CSC. “Anton/Bauer products gave us the ability to match the challenges The Americans crew had while offering the flexibility they needed on set and at location.” 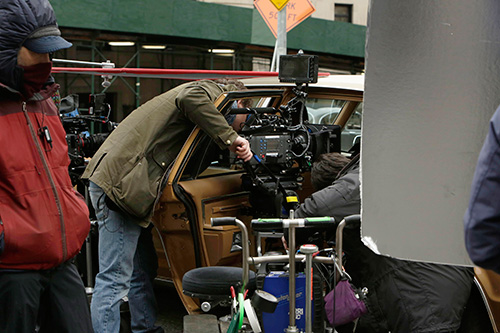